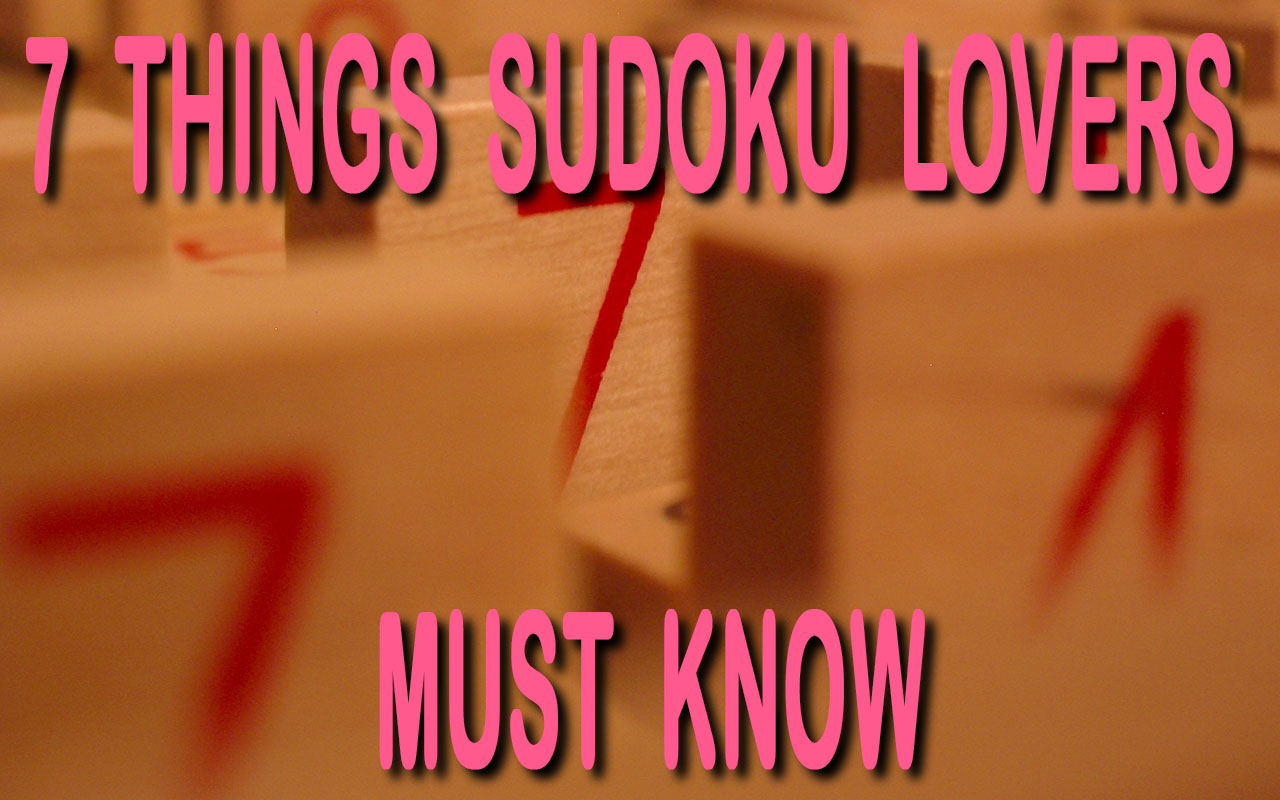 Accept it or not, Sudoku is essentially one of those games that render you with immense satisfaction every time you successfully solve a difficult level. It can be almost equated with a pleasant addiction that fascinates your mind more with each game. According to medical experts, cracking such fun puzzles can be an effective way of draining stress and anxiety that inevitably piles up after a hectic day. The mind perceives it as a breath of fresh air; something that qualifies as an obligatory respite. Well, if you are somebody who loves challenging themselves with intricate and daunting Sudoku puzzles then, we can assure you that you have landed on the right page. Before we move on to anything else, let us take you through the rules of Sudoku once more so that you know you are doing it right.

That’s all you have to bear in mind. For all you fanatics out there, we will be jotting down 7 Sudoku facts that you must know!

1. There are two techniques for solving the puzzle

There are principally two ways of approaching and solving the Sudoku puzzle, namely Crosshatching and Penciling In. In the “Crosshatching” technique, the player starts with a single nonet, or simply put, one of those 3*3 squares. In this system, the player places numbers that will appear in the nonet only once and also a single time in the associated row and column. The clues of the Sudoku puzzle are spread out in such a manner that you will be able to easily determine if the number you are thinking is appropriate for the cell or not. On the other hand, “penciling in” refers to the process of filling in all the probable digits in each cell of the given nonet. After entering the numbers, you will have to apply the crosshatching procedure to remove the ones that seem incorrect.

2. You can start the puzzle from anywhere

Unlike chess, ludo or other such games, you are not compelled to start Sudoku from a fixed corner, column or row. You can lead from anywhere depending upon your convenience and degree of expertise and then start exercising the penciling in or crosshatching method. However, if you are a beginner, we would recommend you to start from one end to make sure that you have some level of control over the digits and that they are being noted down in a disciplined pattern that will eventually help you keep their track.

3. The popularity of Sudoku is as humungous as the Rubik’s cube

If reports are to be believed, Sudoku first came into the limelight back in 2005 and became an instant hit after it was introduced into the mainstream puzzle. Very interestingly, Sudoku has enjoyed popularity as much as the Rubik's cube that lived from the '80s. If you ask us, we are far more impressed with Sudoku than Rubik’s cube and the reason is very straightforward; once you successfully crack the code of solving a Rubik’s cube, the journey from thereon becomes easy-peasy lemon-squeezy. But, with the Sudoku puzzle, it only gets better- even though you are aware of the staple technique, there will always be a mystery waiting to unfold in the corner. As opposed to the common belief that Sudoku originated in Japan, this game that was formulated and incepted under the name of "Number Palace" in 1979 in America. Later, the name Sudoku was designated by the Japanese publisher Nikoli. Unfortunately, the creator of the game, Howard Garns died even before the game got to back itself in such recognition.

4. You should always look for trusted platforms to solve the Sudoku puzzle

Did you know that most of the Sudoku puzzles that are doing rounds on the internet today are utterly incorrect? You can blame it on the inefficient mechanical generators or the laziness of the developers but, the truth will remain the same. Now you know why even though you would sit through the puzzles for hours, scratching your head, asking your friends to assist you, there would be no palpable solution. This is the reason why we often recommend people to look for trusted or esteemed platforms to solve the puzzles on; otherwise, you will keep trying and your numbers will never fall into their allocated cells.

5. There can be innumerable combinations

Sudoku puzzles, just like all its equals can make way for innumerable combinations and levels of complexity (but, before you start losing your mind, read on). For people who prefer to increase their edge with each game, Sudoku is their ideal resort. There are a total of 6 sextillions (a thousand raised to the seventh power, that is, 10 the power 21) of possible puzzles but, only 5,472,730,538 of them can be evaluated into distinct solutions and obviously, you will need more than just this one life to solve them all. And, as far as the difficulty levels are concerned, let’s not even get started; they can be of incalculable numbers and all of them promise to challenge and polish the thinking abilities of the participant for the better.

6. It is only a logic game and nothing else

Not every single numeric puzzle in the world demands excellent knowledge of mathematics to solve them and thankfully, one of them is Sudoku; the entire game is conceptualized to put your logic to test and nothing else. In contrast to the traditional crossword puzzles that expect the player to know almost all the languages known to mankind (you may learn the entire dictionary by heart, but strangely you will still have chances of falling short), Sudoku is easily understood by a lot of partakers more so because of its independent characteristics. Furthermore, sometimes Sudoku doesn't even involve numbers but, are devised in letters and symbols to make them even more intriguing for Sudoku lovers (you must try them at least once to relate with our level of glee).

7. It boosts concentration and focus

Like we have already mentioned in the introduction of this article, Sudoku plays a crucial role in improving the concentration and focus of a player if he engages himself in the game regularly. In fact, it can prove seemingly advantageous if one is battling depression or suffering from dementia and Alzheimer’s. People whose age falls within the window of 6 to 120 years can take to Sudoku to enrich their mental abilities and maintain a healthy condition. Far from inducing any side effect, playing Sudoku grants your brain with a new perspective each time you try attending it, and in this monotonous life of the 21st century, the minds of Sudoku lovers couldn’t be more thankful.

4 Reasons Why Sudoku Is Better Online Than On Paper What Makes Sudoku Easy, Medium, Or Hard? Here’s The Science Behind Sudoku Levels